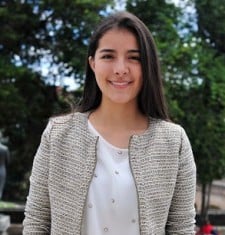 ACTIVIST of education, international relations student at the Pontificia Universidad Javeriana, co-founder of thefoundation ePpai. Thanks to her dynamic spirit was designated by the UN as A GLOBAL YOUTH AMBASSADOR of World at School initiative.

She was born on October 25, 1996 in Popayan city, Colombia. Parents are Maria Cristina Collazos and Jair Mendoza, both electrical engineers. She is the eldest daughter of the marriage, her younger sister: Laura, attends the tenth grade.

She speaks Spanish and English.

Thanks to several changes and movements that Diana has lived, she is adapted to change and new environments. Knowing diversity of people, customs and cultures helped her to understand various points of view that has been characterized her in tolerance for differences.

During his elementary and high school study, she studied in eight different schools, among them: The San Jose School of Tarbes (Popayan, Colombia), Montessori School (Bogota, Colombia), Saint Gabriel School (New York, USA) and the American Campestre School (Popayan, Colombia) where she received her From an early age her parents instilled in her the social work, helping others. One of Diana’s earliest memories is playing and sharing her father with some orphans from a foundation.

With all these bases, Diana began to lead her family campaigns done for some years, which consist of giving joy, smiles, Diana’s dream was based on helping others. At first, she wanted to be a scientist, an expert on viruses, but when she consolidated her life project chose to become an internationalist, in order to help many more people. In the ninth grade, she accomplished to be part of the United Nations Club at her school, participated in speech competitions and regional meetings of leaders. Experiences that have been helped her to develop skills in public speaking, public management and In eleventh grade she was vice president of the “community help” club at her school and with a group of students created a movement called HAS PARTE, aimed at raising awareness in society about the importance and need for help.

In that same year she was leader and volunteer at the XXI National Games 2012 with headquarters in Popayan city.

At just 16 years old, in the summer of 2013, she traveled to the Big Apple, New York, where she done one of her dreams:meet the headquarters of the United Nations. On this same trip, she participated in various events and campaigns: United Nations International Youth Day 2013, Conference on Inter-Religious Relationship, Peace Building & Post- 2015 Development Goals, The International Day for Dreamers, Dream Day 2013, Unification Theological Seminary,The interfaith Seminary, National Black Family Convention, Social Good Summit, Metro Ministries, The New Future She study a semester of Politics and International Relations at the Universidad Sergio Arboleda, where she was part of the group of the United Nations and the Group of social entrepreneurs.

In April 2014, she was named as A Global Youth Ambassador of A World at School initiative.

Now, she exercises its role as an educational activist, being part of various projects and initiatives for the education of children and youth in Colombia.